Various stories exist recounting how the salad was invented. One says that it came about in the 1937 at the Hollywood Brown Derby restaurant, where it became a signature dish.” One night in 1937, Bob Cobb, then owner of The Brown Derby, prowled hungrily in his restaurant’s kitchen for a snack. Opening the huge refrigerator, he pulled out this and that: a head of lettuce, an avocado, some romaine, watercress, tomatoes, some cold breast of chicken, a hard-boiled egg, chives, cheese and some old-fashioned French dressing. He started chopping. Added some crisp bacon — swiped from a busy chef.

“The Cobb salad was born. It was so good, Sid Grauman (Grauman’s Chinese Theatre), who was with Cobb that midnight, asked the next day for a ‘Cobb Salad.’ It was so good that it was put on the menu. 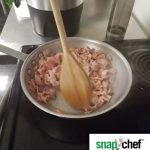