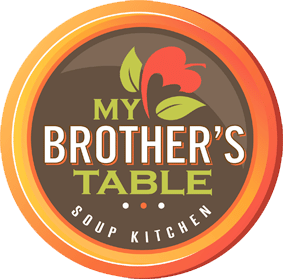 My Brother’s Table began in 1981 in the City of Lynn, an old city certainly with its share of poor people, as a vision shared by a handful of people who were moved by compassion to respond to the growing needs of the hungry people they saw around them. The founders realized that food pantries, senior services, and school-based programs did not meet the needs of everyone in the community.

One day Nancy Ryan of Catholic Charities observed a group of men gathered around a fire in a cemetery trying to heat a can of beans they had just received from a food pantry. Inspired she had a dream: a place where these desperately needy people could go inside, out of the weather, to sit down and eat a hot, nourishing meal.  She envisioned a place where they could feel comfortable—both physically and psychologically—and for a time, at least, regain the lost dignity that poverty and hunger steal along with material necessities.

Several years ago MBT found itself in need of a Head Chef to oversee the many volunteers and food donations and turn out hundreds of nutritious meals seven days a week. They turned to Snapchef and Snapchef’s Chef John Randle answered the call taking the reins is still there today! By extension MBT has become part of the Snapchef family.