August 16 is national Bratwurst Day, and in honor of this timeless, quality sausage, our own Chef Will McDonough has created an outdoor grilled version of a classic Bratwurst feast. Give it a try and let us know what you think. 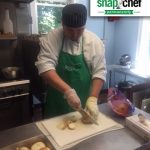